Taking time to be inspired

I have not really made specific resolutions for this year (I gave up on that a long time ago!) but there are just general things that I would like to keep doing, or do more of or begin doing not just for 2015 but overall. I write myself little lists in my diary and try to get to them when I can. One thing I wrote late last year was a list of upcoming exhibitions I wanted to see and at the very top of the list was the Rembrandt The Late Works exhibition at the National Gallery in London.

Life has changed a lot in the last couple of years and one of the things I don’t really talk about online is the fact that my husband is now disabled which makes a trip like this impossible for him and as a consequence I have to force myself to do anything like this on my own and put the self-imposed guilt of taking ‘me-time’ trips to the side as much as I can. However as an artist, I do feel the need to be inspired by the great artists and see art as much as possible and that is definitely an area that I have neglected for long enough. So despite having been in bed for almost a week off and on with the flu, off I toddled to London last weekend with the intentions of seeing as many exhibitions as I could in the two and a half days I was there. As it turns out I was still as sick as could be with bouts of dizziness, exhaustion and just generally feeling as weak as a kitten so my weekend did not quite go as planned but I did do as much as I could whilst there.

The first day I went to the British Museum and saw the Witches and Wicked Bodies exhibition which I had missed when it was on in Edinburgh. I had purchased the book a while ago so it was wonderful to see these richly detailed prints and drawings in all their striking glory. It is a fascinating subject – the fear of the unknown and misunderstood which has led to men, women and children being blamed and demonized for seemingly purposeful acts of sorcery which were certainly in reality natural occurrences or simply bad luck. From Durer and Goya to Fuseli and Redon there was so much to see and pour over but the busy’ness of the exhibition made this difficult – but now I can pour over the book and re-read it with fresh eyes having seen the work in the flesh so to speak. 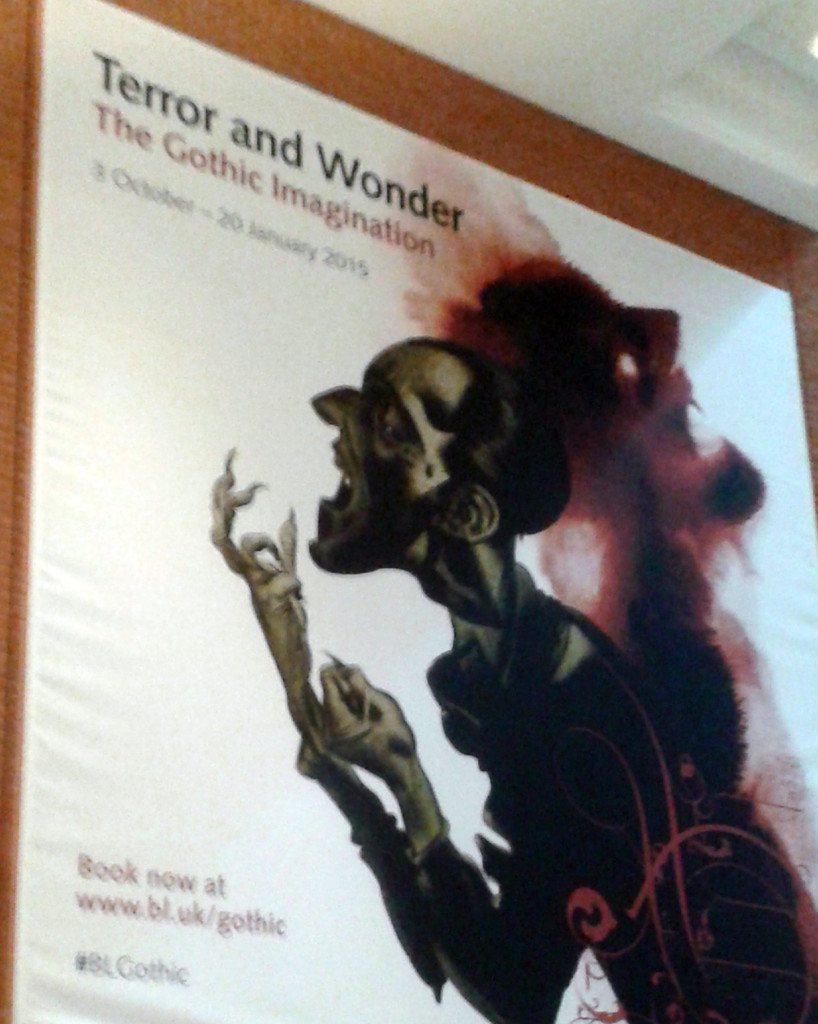 On the Saturday it became an unintentionally gothic weekend with me feeling distinctly unwell and not wanting to walk too far from the hotel so I went to see an exhibition which perhaps in other circumstances would have been way down on my list. But I ended up enjoying it nonetheless. Terror and Wonder at the British Library was a hop, skip and a jump from my hotel and as the website describes was “Two hundred rare objects trace 250 years of the Gothic tradition, exploring our enduring fascination with the mysterious, the terrifying and the macabre” so as you can tell – carrying on a bit of a theme from my trip the day before! The exhibition mainly consisted of books from the libraries collection along the theme along with posters and video clips but the information and text brought it all together and it ended up being quite fascinating. 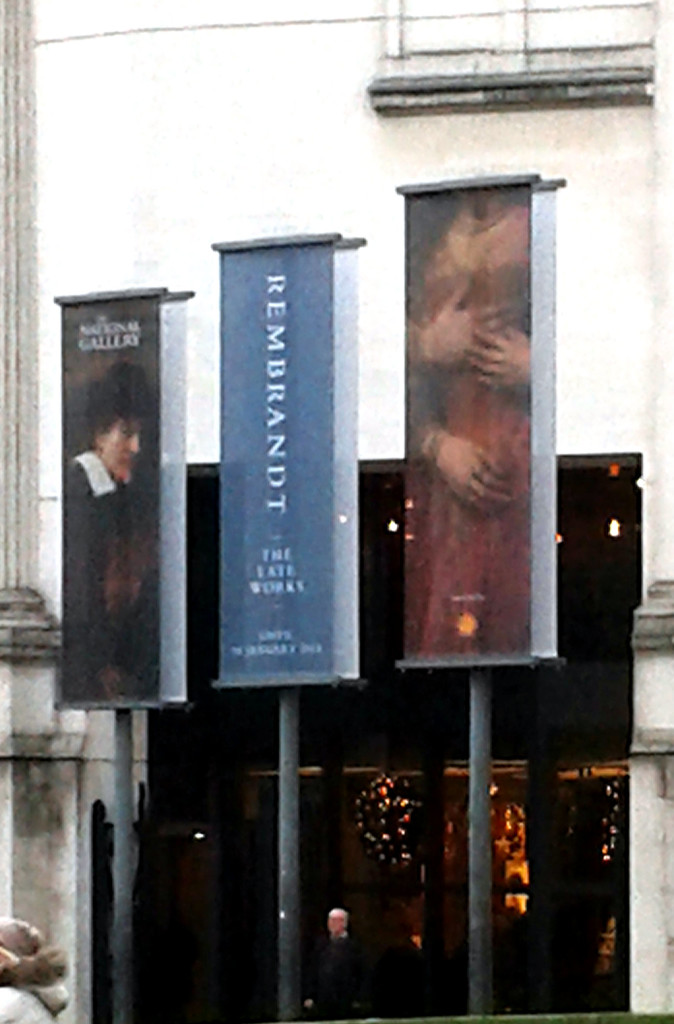 I wish I had been able to see the Rembrandt exhibition earlier in the weekend as by the Sunday I was feeling distinctly ropy but with it just being after New Year the Friday and Saturday was only open to Museum members so Sunday afternoon it had to be. It made the whole trip entirely worthwhile. The whole exhibition literally took my breath away and really confirmed to me my reasons for wanting to see more art in real life – books and videos and postcards are wonderful but really you cannot even imagine the richness of colours or depth of tone unless you are standing in front of a painting by Rembrandt. I was close to tears most of the way around just with the whole experience of it. It was incredibly busy and my head was swimming but I took a chance to sit down whenever I could in the fleeting moments where there was space on a bench and took some notes – some of which are here… 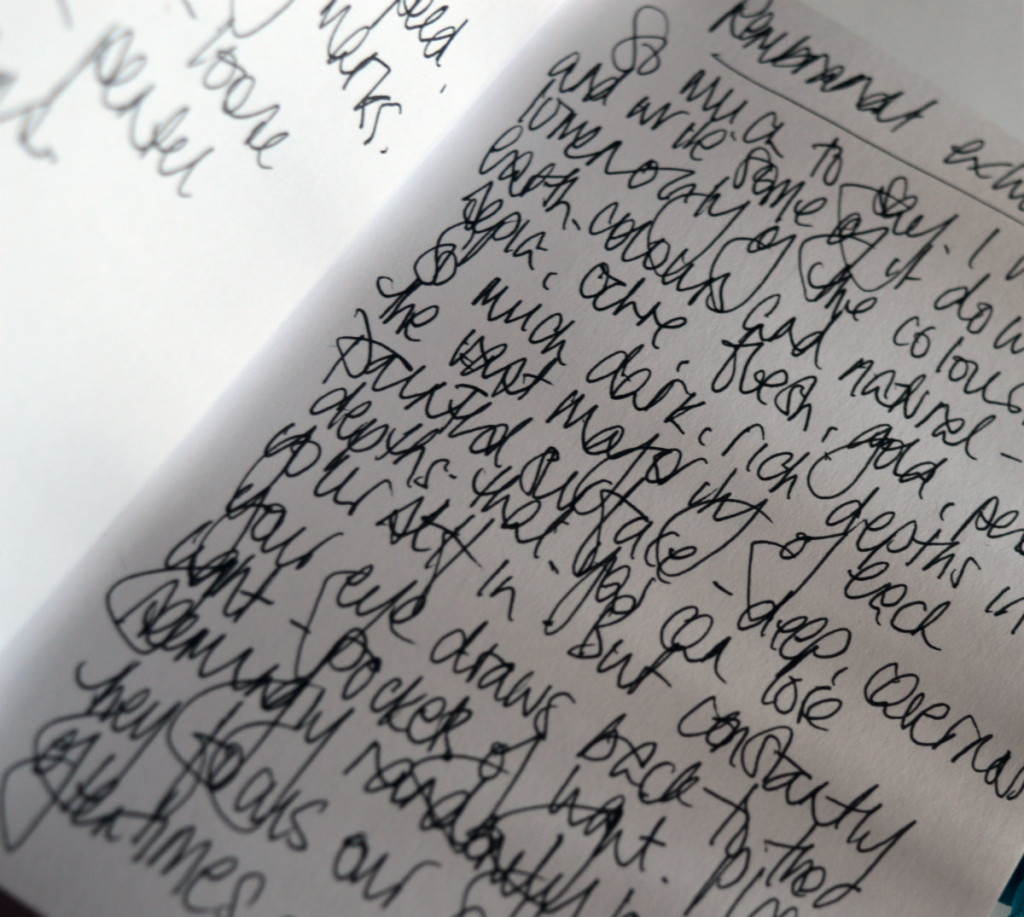 “… the luminosity of the colours, mostly earth colours and natural – brown, sepia, ochre, flesh, gold, peach. So much darkness, rich depths in the vast majority of each painted surface …. deep cavernous depths that you can lose yourself in.

… But constantly your eye draws back to the light – pockets of luminous light. Placed seemingly randomly but they focus the viewers attention oftentimes on the face or the hands or a feature but sometimes on a collar or article of clothing. The paintings appear as if they are lit from within.

… It is amazing how much of each painting is so crudely painted with the beautifully rendered, focussed details only a portion of the entirety of each piece. Fabrics and clothes and embroidery and hands rather slapdash in their brushstrokes. The markings, the brushstrokes, the many, many layers – the texture of each brush stroke and mark. Built up and built up in an almost sculptural way and yet in the darker areas the layers of paint are so thin and loose. I would love to take a magnifying glass and lean in close to allow each and every brush stroke to seep into my visual memory.” 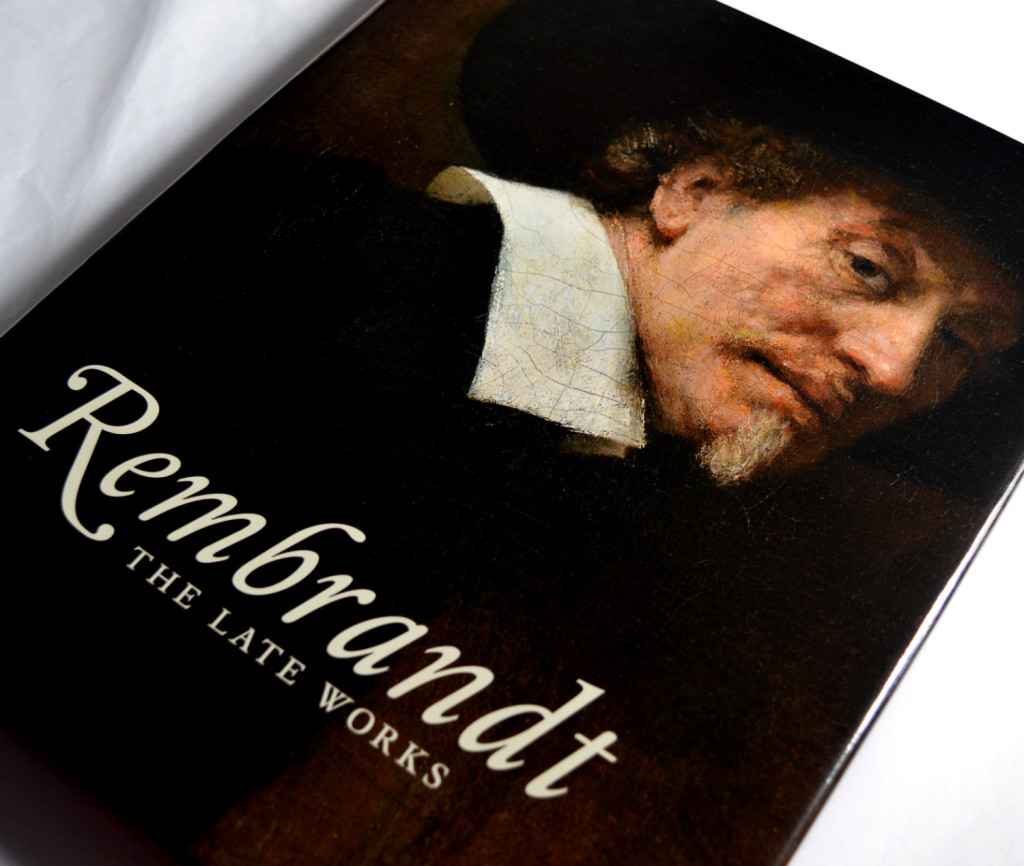 Depending on where you live it might not always be possible to see art up close – especially that of the old masters – but really, if you ever get the chance I would highly recommend that you do. Even looking through the book of the exhibition that I bought when I was there (available online) whilst not in any way living up to seeing the real thing, immediately brings back the memories of seeing those glorious brush strokes in real life.

I feel deeply inspired and ready to work on my paintings and art work this year. Whilst I can only dream of creating artwork with even a hint of the depth and atmosphere as Rembrandt, or indeed any of the great master artists – I can always work hard to improve an anything I do and get better and better in my own small way.

Take a day out and feed your soul with inspirational art if you can! I know I will be making more of an effort to in the coming year and already have another trip in my mind to see some more exhibitions. 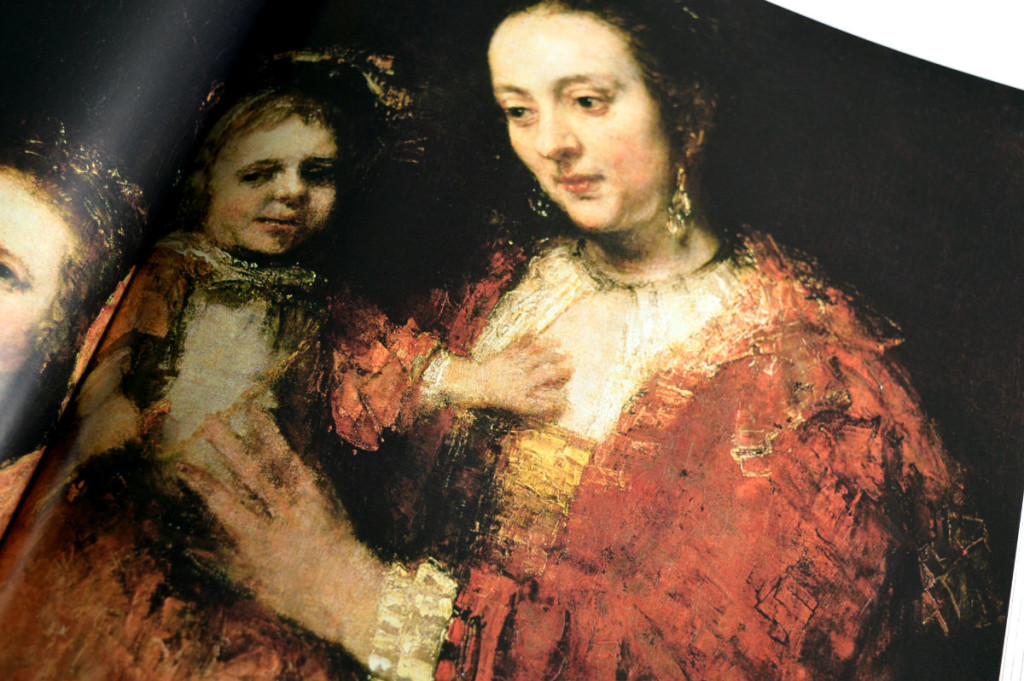 Portrait of a couple know as Isaac and Rebecca – photo of a page of the book from the exhibition.