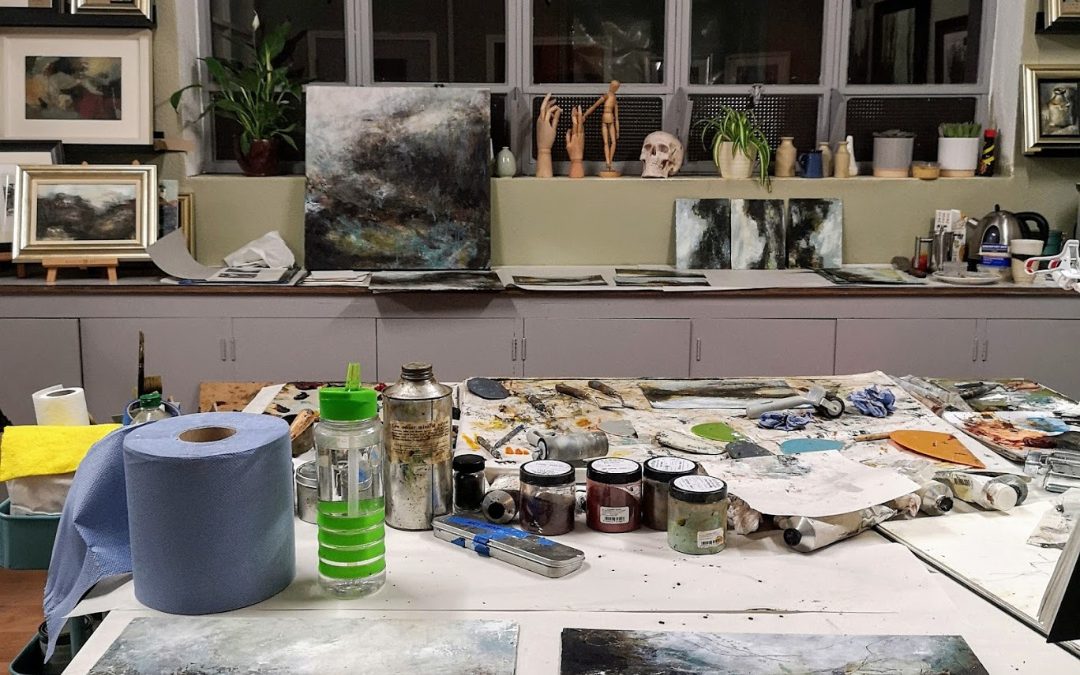 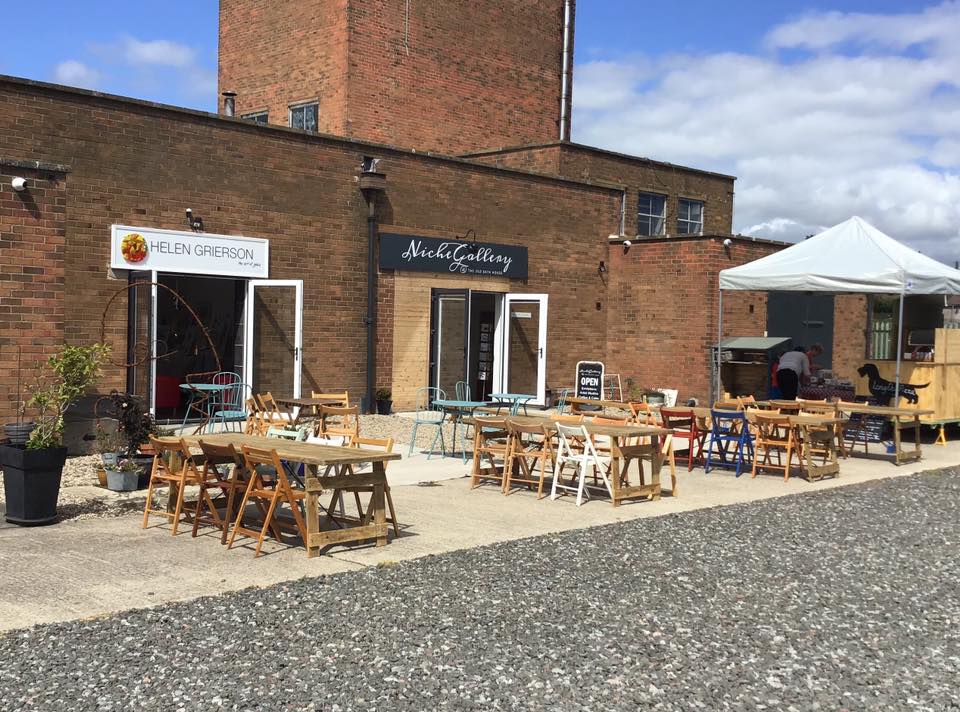 The Old Bath House Studios – back in the warmer months!

The last few months have been a whirlwind of creating my newest online course Gathering the Landscape which involved lots of filming sketching outdoors in and around our unpredictable British weather. It was fabulous though and meant that I spent lots of time out and about around where I live and beyond, capturing and responding to the incredible scenery we have here. Studio time was put on hold for a while but not only due to me creating this course. I have also moved studio!

The empty space before I moved in.

I am absolutely delighted. I had been so lucky to have the space that I have been working in this past three and a half years and I definitely believe in making the most of what you have. But I had also been dreaming of a different space and was always on the lookout for possibilities in an area where there are not many studio spaces available – they are definitely in short supply! So whilst working in my previous space with its steep stairs, low ceilings and less than adequate natural light, one of the biggest challenges was the fact that I was the only one in the building (apart from a bakery at the back) and it really was in the middle of nowhere. Whilst I love to have my own space and definitely work best when I am on my own, I had really been missing out on daily interaction with like-minded folks. So whilst ‘making do’ with the situation, I was always on the lookout for somewhere more suitable. Lo and behold, if you keep your eyes and ears open, something eventually comes along. 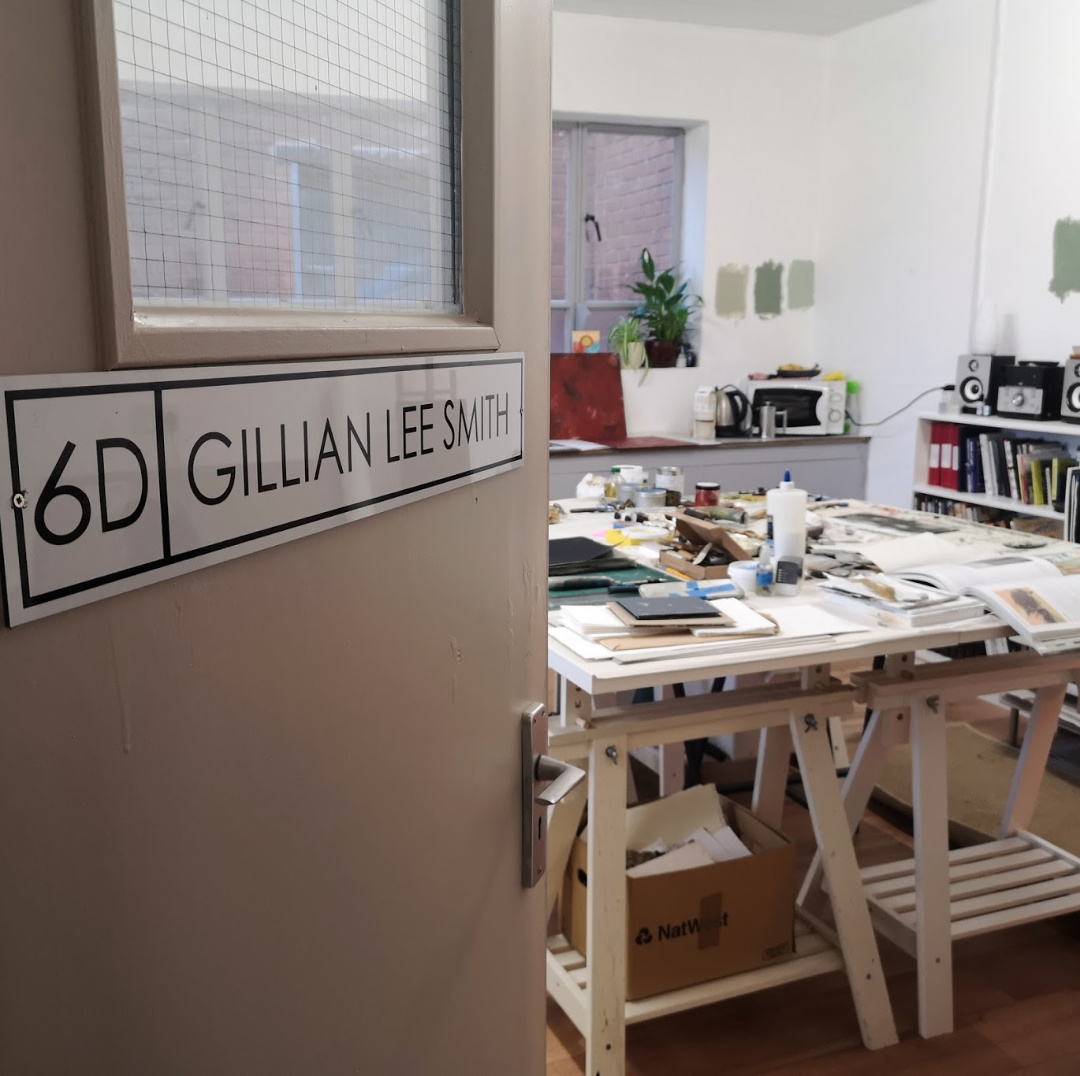 Just moved in and pleased to have my name on the door!

The Old Bath House Studios are where the miners used to go to clean themselves off after long, hard days working in the coal mines. It is a fabulously quirky building – like a rabbit warren inside with rooms of all shapes and sizes. I understand that it closed as the bathhouse sometime in the 1960s and was then a factory where wetsuits were made for a number of years before lying empty for a long time. Thank goodness the current owner saw the potential and for the last three or so years it has been gradually converted to house various artists within its walls.

All painted and ready for my first Open Studios event

So, I picked up the keys for my studio in September, but due to other commitments, it took me a little while to get properly moved in. A few carloads, a truck for the furniture and I was completely moved in early November. After a few days of working in this new space, I felt was feeling the coldness of the icy white walls so decided to paint the space just in time for my first Open Studios event as part of this wonderful community of fellow artists. I wanted a fairly neutral grey-green colour and chose Overtly Olive by Dulux just in case you are curious!! 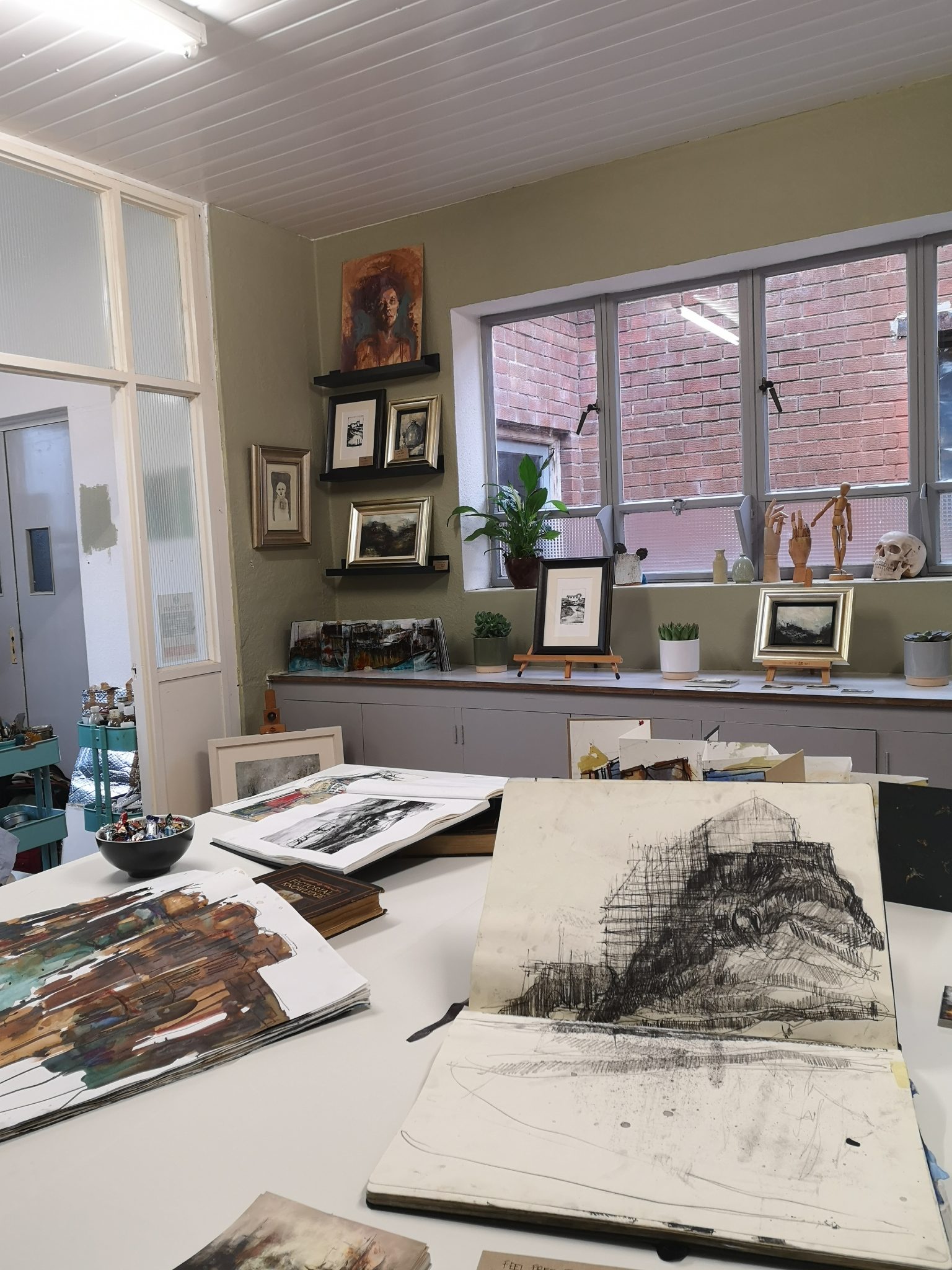 I spent the whole week before the open studios painting the walls, putting up picture shelves and framing art for the event and I am so pleased with how it all looks and feels. A comfy chair was a must, a few plants and all the furniture came from my old studio so I did not have to buy anything new (apart from the chair) which was fantastic. I think I will paint the cupboards soon to fit better with the walls but this room is pretty much done and works beautifully as both a working space and a display area for my work. 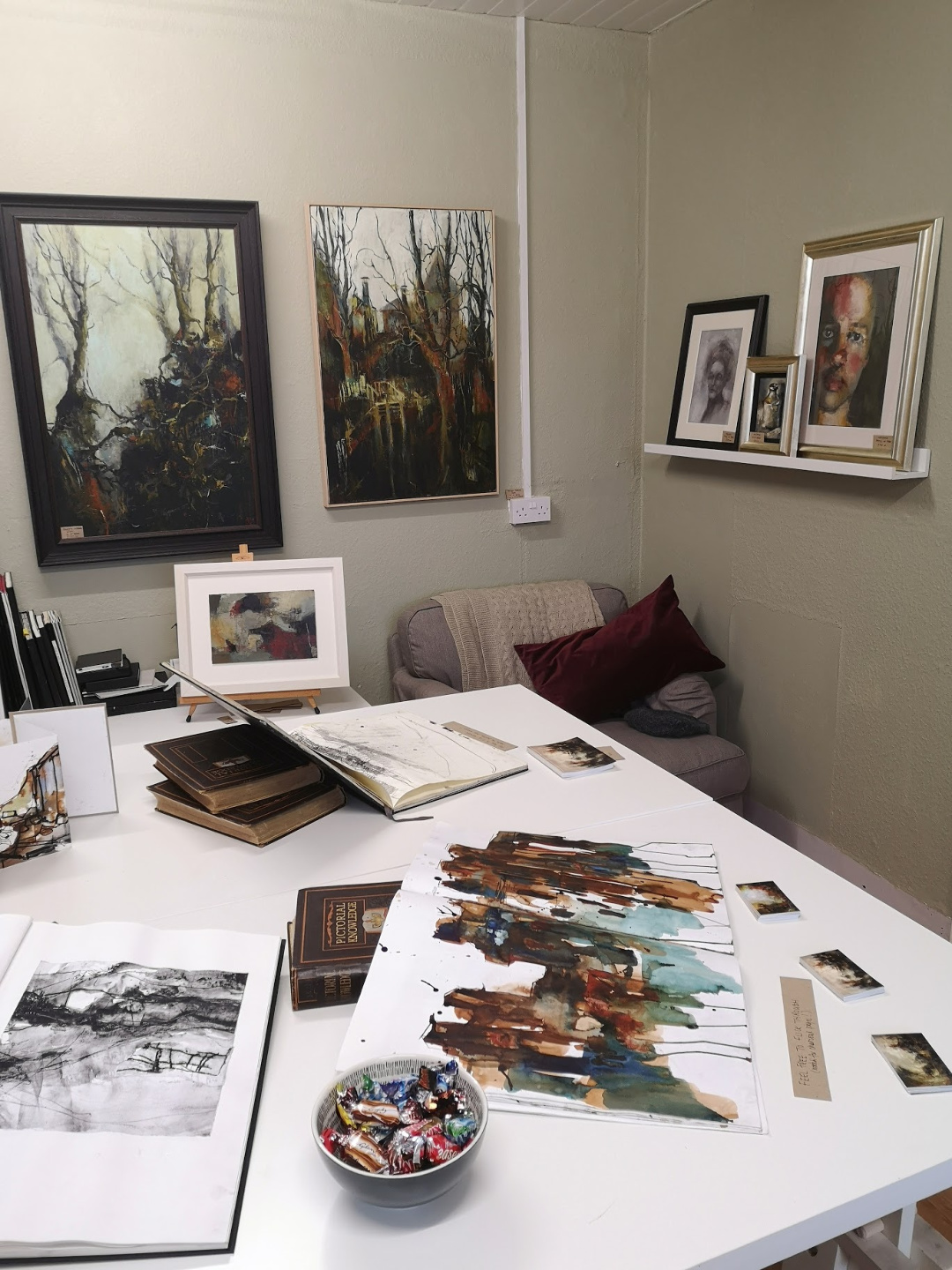 I framed up a lot of older work for the open studios’ event as I had just taken a whole lot of newer work to 2 of my galleries before I moved space. It is actually rather nice to have a small selection of my work from over the past few years. The picture shelves are good old IKEA. They were quite the challenge to put up as these walls are made of concrete and were made to last! The tables serve as a great display area for my sketchbooks which folks were welcome to flick through and proved very popular. 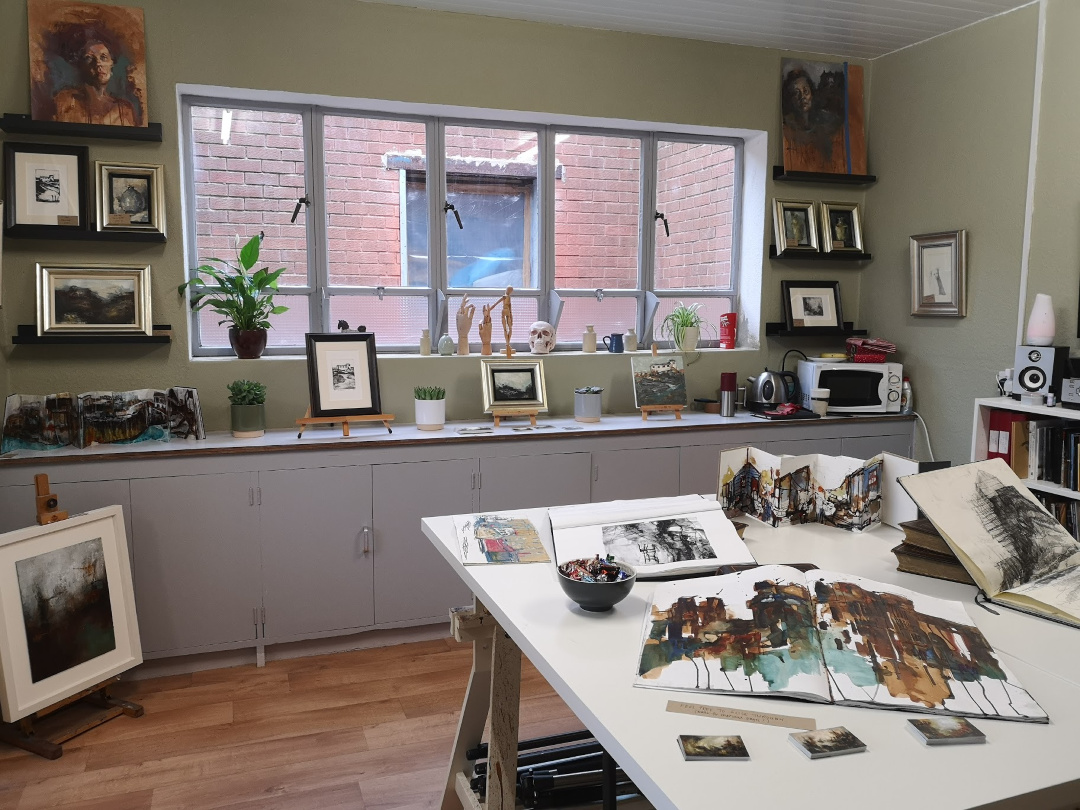 I am so delighted with so many aspects of this new studio. I have large windows that let in a lot of light even on our dull winter days here in the UK.

There are actually two rooms in this pace separated by a partially glazed wall. The larger room is al set up for me to work at the central island of trestle tables where I can work flat and on smaller pieces. I have also been using these tables to do a little book-binding – making some hand-bound sketchbooks for myself and my goal is to save up and buy a printing press in 2020 as I feel led to printmaking as a way of extending my drawing practice. There is a walk-in cupboard which I have rapidly filled with spare frames, boards, and packing materials. One of the best things is a wall of cupboards which houses all sorts of bits and pieces – all rather unceremoniously dumped in for now but I plan to organise these in the new year. 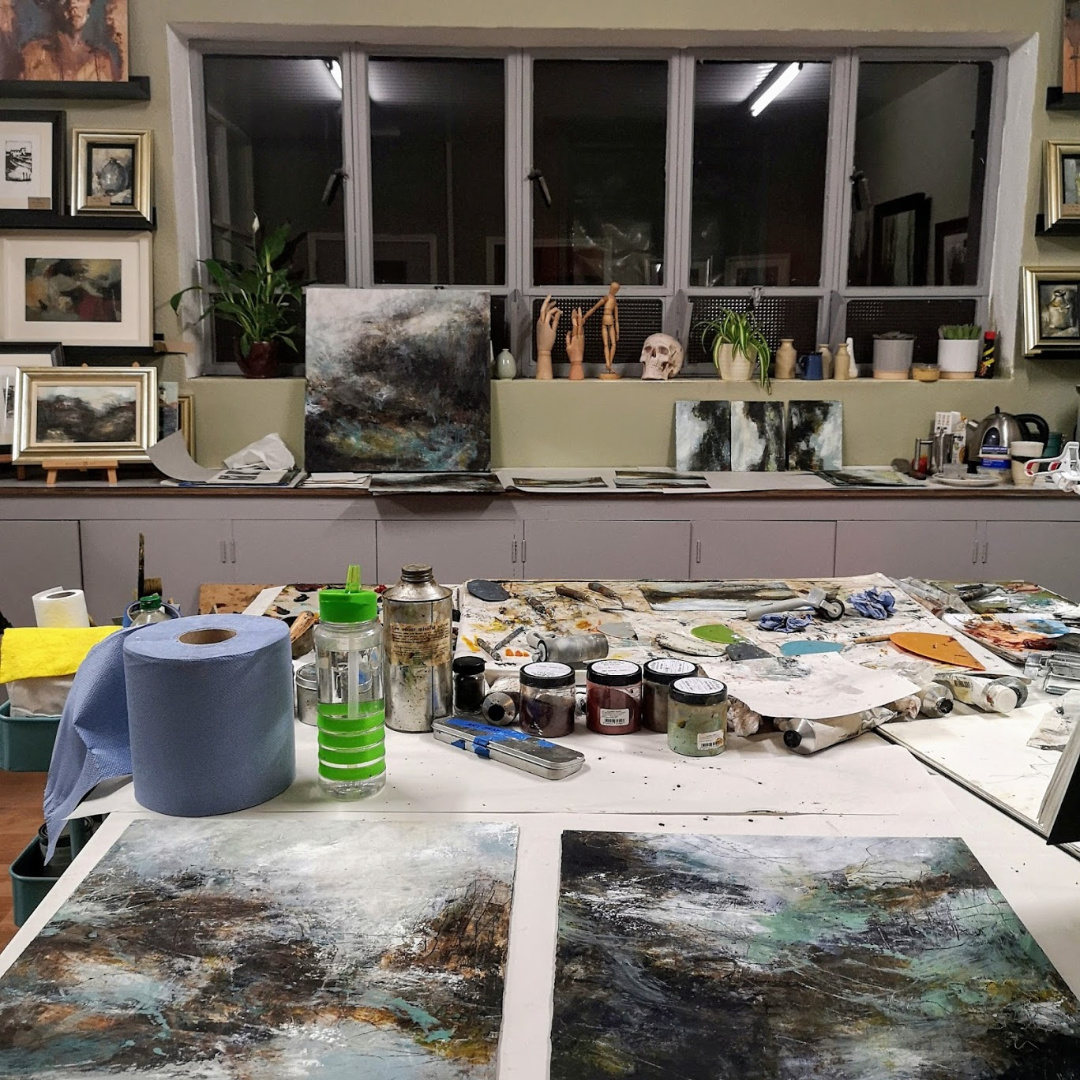 Making good use of the tables to paint whilst I get the main painting room organised.

So, now as I come to the end of the year, the only space left to organise is the other room which will be my main painting space. I was so eager to get straight to work after the Open Studios that I have just been concentrating on painting at the tables for now. But I am aiming to get the painting space organised this week so that I can begin creating some larger works for some events I am taking part in early in 2020. I will also be getting a sink plumbed in early next year which will be fantastic. The flooring is down, it only needs me to organise the stuff I do still need and get rid of the stuff I don’t. I have been putting it off for weeks, just revelling in some creative time – but I can’t put it off any longer!!!

I have had a few studio spaces over the years, from my dining table to a tiny box room, to a small room above a woodworkers shop, an attic room, a spare bedroom and my last studio on a farm. Wherever I have been, I have made the most of the space I had whilst always dreaming of what might be possible in the future. I hope to be here in this new space for a good while to come and I am so looking forward to a brand new year of creativity in 2020.